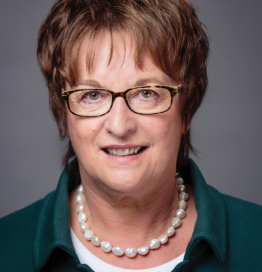 Brigitte Zypries studied law in Giessen and qualified as a lawyer in 1980. She started her professional career in the legal division of the State Chancellery of Hesse as a Research Assistant to the Federal Constitutional Court. From 1991 to 1995, she held leading positions at the State Chancellery of Lower Saxony, Hanover and eventually became State Secretary at the Ministry of Women, Labour and Social Affairs of Lower Saxony in 1997. From 1998 to 2002, she was State Secretary to the Federal Ministry of the Interior in Berlin. From 2002 to 2009, Brigitte Zypries was Federal Minister of Justice. Since 2005, she has served as a directly elected member of the Bundestag for the constituency of Darmstadt, Hesse. Following the last election, she was appointed Parliamentary State Secretary at the Federal Ministry for Economic Affairs and Energy with a special responsibility in the field of IT policy. She also represents the Ministry in the newly created Committee “Digitale Agenda” in the Bundestag.

Company Growth in Germany: The Policy Context (in German)